The loan will be used to undertake major refurbishment of front-of-house spaces and commercial facilities at this historic theatre.

Established in 1913, The Birmingham Repertory Theatre (“The REP”) is one of the leading producing theatres in Britain whose productions frequently go on tour nationally and internationally. The REP has three auditoria – The House (820 seats), The Studio (300 seats) and The Door (150 seats) – as well as extensive onsite production facilities. A high proportion of new work in The Door is a direct result of its artist development programme which provides bespoke training and support to nurture local emerging talent in writing and directing. In 2019-20, The REP hosted 471 performances of 64 shows and 139,000 people attended its performances in Birmingham.

The REP’s creative learning team delivers an impressive breadth and depth of work in the community, using theatre to target a range of positive social outcomes from improving mental health resilience in young black men to reducing loneliness amongst older people living with dementia. The Young REP, The REP’s youth theatre company, works with children and young people across Birmingham and the West Midlands and provides them with the opportunity to work with professional theatre-makers and create and perform in a range of theatrical experiences. The REP won the UK Theatre Award for Promotion of Diversity in 2018 and is a founding member of the “Ramps on the Moon” consortium of regional theatres, which aims to embed a pioneering approach to disability in theatre for performers, creatives and audiences. 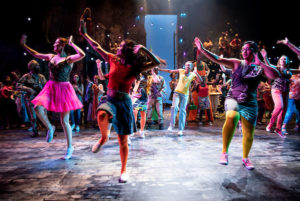 The REP is undertaking a £2.87m capital refurbishment project which will transform the frontage and public areas, creating a more welcoming and accessible entrance, expanding the capacity of the onsite bar and introducing a new cafe with an outdoor terrace overlooking the revamped Centenary Square. They are hoping  to complete the works in time for the Commonwealth Games, set to take place in Birmingham in the summer of 2022, as this will provide a unique opportunity for the theatre to showcase a celebratory programme of events and capitalise on the increased number of visitors to the city.

The REP had applied for £1.47m in grant funding from the Greater Birmingham and Solihull Local Enterprise Partnership but they needed to provide evidence of match funding. They applied to the Arts & Culture Impact Fund (“ACIF”) for a £500,000 bridge loan to help unlock the LEP grant and proceed with the design and tendering stages of the capital project whilst the fundraising team continued with efforts to secure capital grants from trusts and foundations. Since the LEP funding will be released in arrears, the ACIF loan also helps The REP meet the interim cash flow requirements of the refurbishment.

While The REP has an outstanding reputation in terms of its creative output and community outreach, the timing of their enquiry to ACIF in August 2020 came at a time of unprecedented uncertainty as theatres around the country had been closed for months due to the Covid-19 pandemic. It was a learning experience for both the management team producing financial forecasts and the ACIF team assessing risks around the forecasts given that so much was unknown. The resilience demonstrated by the management team in their initial response to the pandemic, their openness and professionalism during the due diligence process, as well as their cautious and agile approach to planning for the future gave the ACIF team confidence in their ability to navigate this difficult period. The REP’s Board had planned multiple check-points on the road to green-lighting the construction phase of the project depending on how the pandemic was unfolding. The ACIF team also asked for a meeting in April 2021 to review the financial position and outlook before the loan funds were drawn.

While The REP hoped to repay the loan early by securing capital grants from trusts and foundations, given the difficult environment for fundraising, due diligence also focused on longer term forecasts and gaining comfort that the theatre’s business model could service the loan from operating surpluses if it were to be repaid over its full term of nine years. The highly experienced and professional team responsible for project management and governance, which included individuals with considerable past experience in delivering similar large-scale capital projects, also gave the ACIF team confidence in The REP’s ability to execute their vision.

The REP has an award-winning creative learning programme, including partnerships with 25 local schools as well as all five universities in the city and the Birmingham Virtual School for Looked After Children. The REP delivers over 70,000 engagements with children, young people and vulnerable adults each year on projects ranging from drama and writing workshops to performing onstage in large scale productions. The REP’s Drama Practitioners are embedded within local schools and deliver tailored workshops every week of the academic year, using drama techniques as teaching tools to explore and enliven the curriculum. In addition to mainstream schools, The Open REP Network, in partnership with the Open Theatre Company who are experts in using physical theatre to engage young people with learning difficulties, work in schools for children and young people with special educational needs or disabilities. Overheads for this school programme are funded from the theatre’s operating surpluses and the capital project, which is very much aimed at generating vital additional revenue, will therefore help expand the impact of the theatre’s creative learning programme  by reaching more children and young people every year.